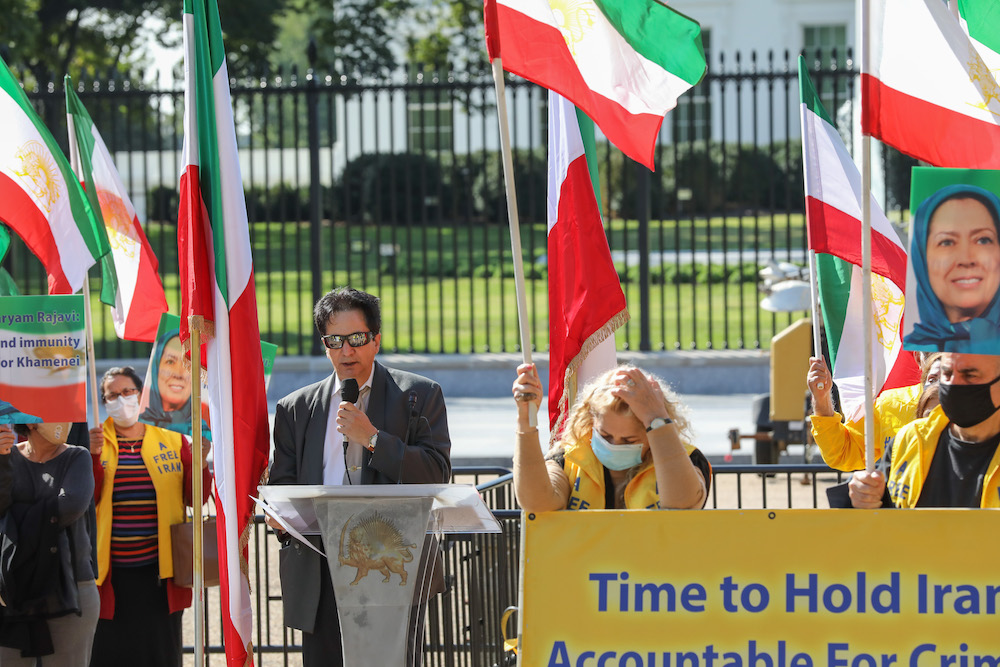 Iranian Americans supporters of the National Council of Resistance of Iran (NCR) held a rally across from the White House on September 22, 2020.

WASHINGTON, DC, USA, September 25, 2020 /EINPresswire.com/ — Iranian Americans supporters of the National Council of Resistance of Iran (NCRI) held a rally across from the White House on September 22, 2020. The event, live streamed into Iran, declared support for the restoration of all UN sanctions on the regime in Iran, as called by Mrs. Maryam Rajavi, the President-elect of NCRI in her speech at European Parliament on February 7, 2015, and asked for recognition of the Iranian people’s struggle for freedom.

The rally also urged a firm policy on Iran in response to a staggering rise in arrests and executions of pro-democracy protesters, as well as terrorism and regional aggression. It called for additional sanctions on “all Iranian regime’s entities and officials involved in the suppression of the Iranian people, export of terrorism abroad, and propaganda to whitewash the regime,” stressing that “the time has come to end impunity for the criminal regime in Iran, and stand with the people of Iran who are protesting for a secular, non-nuclear republic.”

Representatives of the Iranian American Community of Virginia, Ms. Shirin Nariman and Ms. Seema Tabatabaei, addressed the rally which was emceed by Mr. Aref Alvandi, a member of the Iranian American Community of Maryland. Mr. Moslem Eskandar Filabi, former Iranian wrestling champion, three-time heavyweight Olympian, recipient of 17 medals in international games, and Chairman of the Sports Committee of the National Council of Resistance of Iran, also spoke at the rally.

In his opening remarks, Mr. Alvandi said, “We call for imposing additional sanctions on all the Iranian regime’s entities and officials involved in suppression of the Iranian people, export of terrorism abroad, and propaganda to whitewash the regime.”

Keynote speaker Mr. Alireza Jafarzadeh, Deputy Director of the US Office of the National Council of Resistance of Iran (NCRI-US), noted that “Since 2015, the Iranian Resistance, on behalf of the people of Iran, has demanded that all six previous UN Security Council resolutions sanctioning the Iranian regime be restored. The Iranian people welcome the reimposition of UN sanctions on the regime.”

Quoting Mrs. Maryam Rajavi, the NCRI President-elect, Mr. Jafarzadeh said, “Our people do not want uranium enrichment plants; neither do they want a ballistic missile program, nor the regime’s criminal wars in Syria, Iraq, Yemen and Lebanon.”

In another rally held across from the State Department as the regime’s president, Hassan Rouhani, addressed the UN General Assembly virtually, Iranian community members denounced him as a main culprit in the November 2019 massacre of Iranian protesters and as being directly involved in the regime’s malign activities in Iran and abroad.

NCRI-US Representative Ms. Soona Samsami was the keynote speaker at the afternoon rally. On behalf of the Iranian people, she welcomed the new round of US sanctions on the theocratic regime, adding, “The people of Iran demand accountability for the ruthless rulers of Iran; those who massacred 30,000 political prisoners in 1988; those who assassinated Professor Kazem Rajavi, the champion of human rights, in broad daylight in Geneva in 1990, and so many others who fell victims to the terror machine of the Ayatollahs; and those who massacred 1,500 protesters in the November 2019 uprising.”

“Now that the Iranian people’s uprisings – from December 2017 to November 2019 and January 2020 – have dispelled all illusions about the stability of the clerical regime, we call upon all governments to stand on the side of the people of Iran as they strive for freedom, liberty and prosperity,” she said in closing.

Mr. Kazem Gholami, a renowned international and Iranian wrestling gold medalist, addressed the rally, as did Mr. Amir Bolurchi, a Virginia-based Iran policy analyst. The State Department rally was emceed by Ms. Rahileh Sadeghpour, a member of the Iranian American Community of Virginia.

“We call on the United Nations and the Security Council to compel the mullahs’ regime to admit international delegations to visit Iranian prisons and political prisoners, particularly the detained protesters”, said Ms. Sadeghpour.

Simultaneous with the DC rallies, representatives of the Iranian American Community of New York assembled across from United Nations Headquarter, where they denounced Rouhani as being not the representative of the Iranian people. They also declared that, given over 40 years of executions and massacres of Iranians and region-wide terrorism and aggression, Iran’s UN seat must be taken away from the theocratic dictatorship.

Rally and call to action in support of...