In Remembrance of 120,000 Fallen for Freedom, Iranian People Rising

WASHINGTON, DC, October 21, 2020 – In an elaborate photo exhibition held by the Organization of Iranian American Communities (OIAC) outside the U.S. Department of State building in Washington, DC, prominent speakers and supporters of democratic opposition coalition, the National Council of Resistance of Iran (NCRI), highlighted four decades of systemic arrests, torture and executions in Iran and called on the international community to hold perpetrators of these crimes accountable. 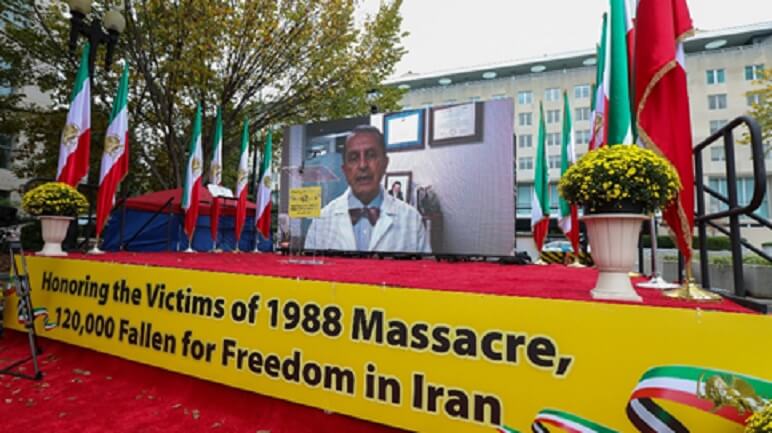 Judge Mukasey reminded global leaders that, “this regime is not going to change. Rather, it has to be changed. The people who must do that are the Iranian people and it is our job to support them in any way that we can in this struggle.”  Former Senator Robert Torricelli noted that, “the tactics of America of how to help the Iranian people to get to this in the future may or may not change, but the goal does not. The mullahs must fall, and freedom must return to the Iranian people in any form of government that they choose that defends basic liberties.” “As we look today at the faces of the martyrs,” Mr. Torricelli said, we are “remembering those who lost their lives either in the slaughter of 1988 or on the streets of Tehran and other cities around Iran.”

Ambassador Mitchell Reiss referenced the qualifications of the NCRI leadership and said, “Under the leadership of Madam Rajavi, the MEK offers the Iranian people and the world a different future. She offers a democratic alternative based on individual freedom and human dignity, a vision that could not be more different from the dictatorship that now controls Iran.”

Highlighting the necessity to hold Iranian regime officials accountable, Mrs. Linda Chavez said, “it’s important that the State Department focus on what is happening in Iran because this is something that needs to be brought to the international community’s attention. And the United States has the opportunity to go to the United Nations Security Council and to demand that

justice be brought in these horrendous killings.”

Former Congressman and Judge Ted Poe (R-TX) also lamented the notion that Iranian leaders are yet to face accountability for their crimes and added, “no one has been held accountable, not even the attacks and the plots, the plots of assassination in Albania, Paris and other places. Not even the assassination of Kazem Rajavi in Switzerland.”

Three former political prisoners, Mrs. Roya Johnson, Mrs. Shirin Nariman and renowned surgeon, Dr. Firouz Daneshgari, addressed the event and provided firsthand accounts of the human rights violations they were subjected to, and witnessed.  In her remarks, Hannaneh Amanpour said, “I was only five years old when my father was killed by the Khomeini regime in 1988.”  Roya Johnson, spoke about Navid Afkari, a wrestling champion who was executed in Iran on September 12, 2020 and added, “Navid is from the same city that I am from. Shiraz. He was held in the same prison where I was held for 2 years, the notorious prison of Adel Abad. He was probably tortured in the same torture chambers where I was tortured too.”

Event participants and speakers called for:

The exhibit displayed thousands of pictures killed in Iran since 1979, and called on the United Nations to move beyond the dozens of resolutions deploring the state of human rights, but to appoint a body to investigate its crimes, including the “ongoing crimes against humanity in Iran.” 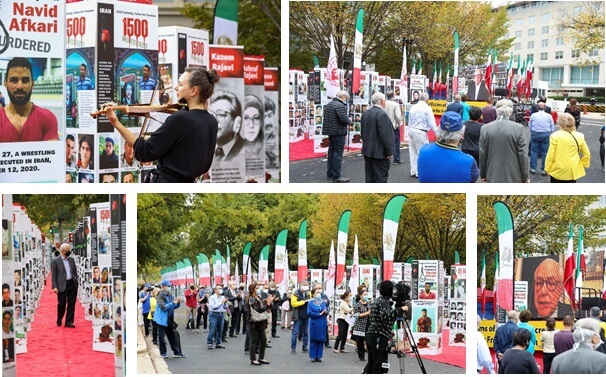 By1988, Iran’s prisons were packed with thousands of political prisoners, mainly belonging to the main opposition, the MEK.

The UN peace accord, and the reluctancy of the masses to go to the Iran-Iraq war front line cornered Khomeini, the Supreme Leader at the time, forcing him to drink the “poison chalice” as he called it, and accept his inevitable warmongering defeat.

In order to prevent post war unrest and take revenge on the opposition, Khomeini issued a religious decree ordering the execution of any political prisoners who had not “repented” and who was not willing to collaborate utterly with the regime.

Suddenly, all family visitation to prisons were banned; kangaroo courts were held, and summary execution sentences were issued. Over 30,000 political prisoners who were serving their sentences, or even finished theirs, were executed in the summer of 1988. To this date, the Iranian regime has never officially admitted this massacre, and many victims’ family members who have questioned the massacre are sitting in prisons. Many previous or current senior officials from both sides of the regime, the so-called hardliners, and reformers, were directly involved in this massacre.

The most recent bloody uprising occurred in November 2019 when people poured to the streets to protest the multifold fuel price hike. Quickly, this unrest turned into an anti-government uprising and spread to more than 200 cities, and every single province in the country. The Iranian regime, in fear of being toppled by the people, shut down the internet for weeks and started a killing spree. Snipers were placed at roof tops and government security forces were shooting protesters from close range on the streets. In the matter of few days, the regime killed more than 1,500 protesters and arrested more than ten thousand.