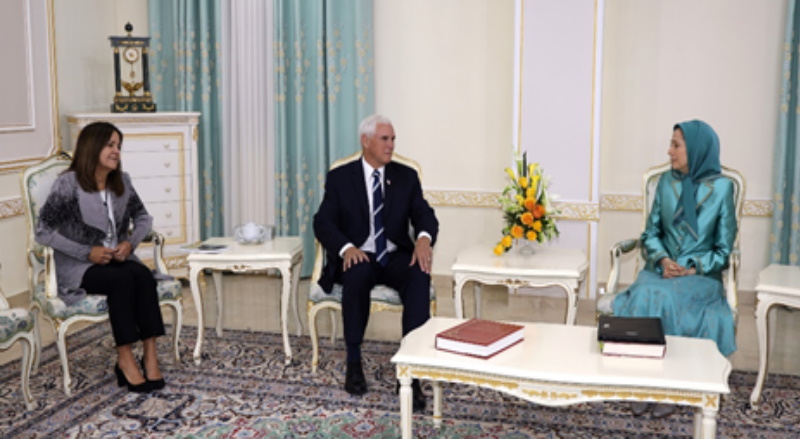 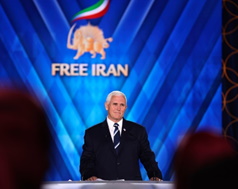 https://twitter.com/Maryam_Rajavi/status/1540068695384399872
In his recent trip to Albania, former Vice President Mike Pence showed world leaders and politicians how they can play a leading role in supporting the people of Iran in their struggle for freedom and democracy. Mr. Pence visited Ashraf 3, the main headquarters of the People’s Mojahedin Organization of Iran (PMOI/MEK), the longest-standing and most organized opposition to the tyrannical regime ruling Iran.

The visit comes as Iran is on the verge of a monumental change. People from all walks of life are in the streets every day, protesting economic woes, government corruption and suppression of freedoms. Teachers, workers, pensioners, government employees, oil and gas sector workers and many other segments of society are regularly holding protest rallies. The protests are marked with slogans that call for the ouster of regime supreme leader Ali Khamenei and his appointed president Ebrahim Raisi.

These protests, which are taking place despite severe security measures by the regime, symbolize what the Iranian nation has gone through in the past four decades. After the 1979 revolution, Ruhollah Khomeini seized control and established a tyrannical theocracy that brutally massacred dissidents, squandered the country’s wealth on developing weapons of mass destruction and waging war on neighboring countries, and exported terrorism across the globe. For the people of Iran, who had overthrown the Shah dictatorship to live in freedom and prosperity, the mullahs’ rule was a betrayal of their aspirations and the sacrifices they made in the 1979 revolution. Today, the mullahs’ regime is the greatest enemy of the Iranian people and one of the biggest global threats.

During their reign of terror, the mullahs have executed more than 120,000 MEK members and supporters, including 30,000 political prisoners who were mass-executed in 1988. Raisi, who is now the regime’s president, was one of the key players in that brutal massacre of political prisoners. I was one of the MEK supporters who managed to escape the regime’s security apparatus and find refuge in the U.S., where I am currently a professor and dean of the School of Engineering at the University of Connecticut.

Despite the regime’s brutal crackdown, the MEK has stood against the dictatorship of the mullahs and defended the rights of the Iranian people. Its sources inside the country were the first to expose the regime’s nuclear weapons program in 2002. The MEK has consistently provided information about the regime’s illicit nuclear sites, its terrorist network and its human rights abuses. The Resistance Units, a network affiliated with the MEK, is the most expansive network of organized anti-regime activists inside Iran and they are constantly carrying out activities to prevent the regime’s repression from snuffling the fire of protests inside Iran.

Today, the confrontation between the Iranian people and the regime is at its highest point. On the one side is a regime symbolized by Ebrahim Raisi, whom the Iranian people have nicknamed “the butcher of 1988,” and on the other are 80 million people who want to enjoy basic freedoms and live decent lives.

In the past, U.S. administrations have mostly stood on the sidelines, remained silent, or sided with the regime when the people held nationwide protests. This is the time to stand with the people of Iran.

Mr. Pence showed how the international community could do this. In his visit to Ashraf 3, Mr. Pence also met with Mrs. Maryam Rajavi, president-elect of the National Council of Resistance of Iran, a coalition of opposition forces that includes the MEK. The NCRI has a platform that calls for the establishment of a democratic state, which gives equal opportunities to all Iranians regardless of their gender, ethnicity and religion; which denounces terrorism and is at peace with its neighbors; which does not need a nuclear weapons program; and which is a contributor to peace and security across the globe. This is what the people of Iran and the world want.

As Mr. Pence said in his speech to MEK members in Ashraf 3, “One of the biggest lies the ruling regime has sold the world is that there is no alternative to the status quo. But there is an alternative – a well-organized, fully prepared, perfectly qualified and popularly supported alternative. … Your Resistance Units, commitment to democracy, human rights and freedom for every citizen of Iran. Maryam Rajavi’s Ten Point Plan for the future of Iran will ensure freedom of expression, freedom of assembly and the freedom for every Iranian to choose their elected leaders. It’s a foundation on which to build the future of Iran.”

Dr. Kazem Kazerounian currently serves as dean and a professor of mechanical engineering in the School of Engineering at the University of Connecticut.

Thousands Rally at the UN, Voice Support for...

Iran exiles sue President Raisi in US ahead...

Iran: Bread Protests Are on Way, Stronger Than...