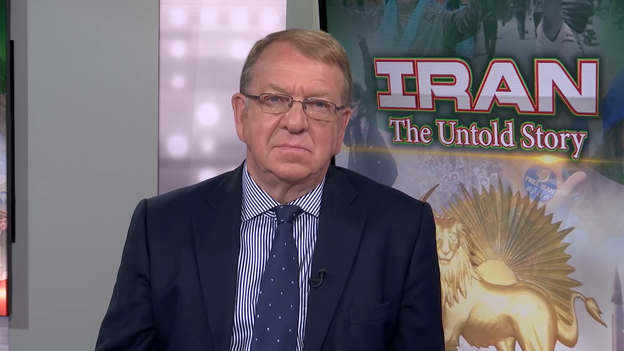 Last summer, crowds of Iranian advocacy groups and like-minded individuals gathered in Paris for the annual meeting of the “Free Iran” movement, calling for the end of Iran’s brutal regime.

Gov. Richardson: “Are you ready for regime change in Iran?”

Meanwhile, in Belgium, a plot to attack the high-profile rally unravels. Police and bomb techs surround the car of a couple accused of working with an Iranian diplomat to bomb the Paris demonstration.

Belgian Federal Prosecutor Buck Sexton: “We are certain it was their intention to hurt people.”

The suspects possessed enough explosives to kill and maim.

Iran expert and former US Ambassador Lincoln Bloomfield was at the Paris rally. He says Iran was behind the foiled attack as French, German and Belgian authorities all confirmed.

Ambassador Bloomfield: “I wonder whether there’s a bureaucratic faction in the Ministry of Intelligence and Security, MOIS, that simply does this for a living. They have people planted in foreign capitals. They had an operation that may have been last minute, but it may have been underway for a year.”

The Paris plot confirms why the US classifies Iran as the world’s leading state sponsor of terror.

Dozens of Iranian dissidents and foreign nationals have been the target of its hit squads and bombs for decades.

April 1990, Switzerland. Iranian assassins gun down a former UN diplomat and brother of the leader of the main Iranian opposition group.

February 1996, Turkey. Iranian agents kill a senior member of the Iranian resistance, who was protecting rights of Iranian women.

And August 2018, Washington. The Justice Department indicts two Iranian-Americans for acting as covert agents for Iran–spying on Jewish centers in Chicago and surveilling Iranian opposition members in D.C. for a possible attack.

BUCK SEXTON:  We’re joined now by Struan Stevenson.  He’s a former member of the European Parliament for Scotland.  Struan, thank you so much for being here.

BUCK SEXTON:  So, you were at the Paris Free Iran rally last year.  Did it frighten you to think that the crowd at that rally could very well have been bombed?

STEVENSON: Well, it’s an appalling concept.  There were over 100,000 people there—men, women, children even, but there were dozens of leading politicians from all around the world.  We had, you know, Rudy Giuliani, Newt Gingrich, Steven Harper, the former Prime Minister of Canada, amongst dozens of leading politicians.  Anyone could have been killed.  This could have been a huge atrocity on European soil.  And the person arrested was a senior diplomat from the Iranian Embassy in Vienna, Asadollah Assadi.  He is now awaiting trial, together with three other Iranians to whom he gave the bomb and instructed them to take it to Paris and detonate the bomb amongst this massive crowd of opposition—NCRI, MEK supporters.

BUCK SEXTON:  So European police officials have undoubtedly and clearly put this on the Iranian state.  Was it to send a specific message that this was targeted?  And what was that message that the Iranian state, if they had been able to conduct this horrific attack, as you said, on a lot of innocent people, as well as senior level officials, what would the message have been?

STEVENSON: Well, you know, we know that Mike Pompeo has accused the Iranians of being the world’s sponsors of terror, of being the godfathers of terror.  They’re involved in the sponsorship of proxy wars.  They back Bashar al-Assad and Syria, the Houthi rebels in Yemen, Hezbollah in Lebanon, the Shia militia in Iraq.  They spend billions of dollars which they deny to their own people by backing these proxy wars and by using the ministry of intelligence and security which is an offshoot of the IRGC as agents for spreading terror and bomb attacks around Europe.  Actually, their embassies are used as quasi bomb factories and, you know, plotting centers for these assassination attempts.

BUCK SEXTON: Immediately after the arrests last year, the Iranian Foreign Minister came out publicly to state that maybe this was a false flag operation that somebody else perhaps put this in motion to make it look like something that the Iranian state would have conducted in order to besmirch the reputation of Iran such as it is, the Iranian regime.  Is this a common refrain from the Iranians when they’re caught like this?  Is this a tactic that they’ve tried before?

STEVENSON: He would say that, but it’s like the iceberg being accused of plotting to sink the Titanic, you know?  I mean this is like a ludicrous concept.  And actually, the bomb attack was planned to take place days before the foreign minister from Iran, Zarif, went to Vienna, which is the embassy that sent one of its diplomats to, you know, sponsor the bomb attack.  Incredible.  It shows to me that the mullahs are panicking though.  They know they’re on their last legs.  There is a tipping point going to be arrive shortly where the people of Iran will further [0:06:53] power and they’re like a wounded beast and they’re now resorting to violence and assassination attempts and bomb attacks.

BUCK SEXTON:  Struan, can you give us a sense of how widespread these efforts from the Iranian regime are to target opposition figures with terrorism, assassination, various plots around the world?  Is this ongoing?  Is this something that we need to be vigilant for going forward as well, or is the Iranian regime a little more careful because they’ve been caught?

STEVENSON:  It is ongoing.  I mean back in 1990, Kazam Rajavi, one of the leading NCRI people in Geneva, was assassinated and 13 Iranians, officials of the Iranian government, were named as the people who had been sent to Geneva to carry out that assassination.  Two years later, there was a guy, a leading NCRI supporter assassinated in Istanbul.  He was kidnapped, tortured to death, and later, one of the people responsible, one of the terrorists, was arrested and led the Turkish police to his unmarked grave where his body was exhumed, and he’d been tortured to death.  I mean these are commonplace, for years they have used their Ministry of Intelligence, MIOS, as a form of, you know, exporting terror and sponsoring terror around the world.  And Albania, where there are now two and a half thousand Iranian supporters of the opposition, the Prime Minister, Edi Rama, expelled the Iranian Ambassador and the First Secretary from the Iranian Embassy in Albania, accusing them of undermining the security of his country, because they had been targeting attacks on the NCRI in Albania.  It’s happened even here in America where, you know, surveillance has been taking place with Iranians trying to track some of the leading NCRI figures here in Washington.  So, you know, it’s great that the Trump administration has now blacklisted the =

STEVENSON: = IRGC, the Iranian Revolutionary Guards, but you’ve got to remember that the MOIS was at one time part of the IRGC.  It’s now a separate entity.  It should be added to the foreign terrorists list.

BUCK SEXTON:  What does the Iranian regime think of the main opposition group out there, the National Council of Resistance of Iran, or the MEK?

STEVENSON:  What does the regime think of =

BUCK SEXTON:  What does the regime think of them?

STEVENSON: They’re constitution says that any citizen of Iran who is caught supporting the MEK or the NCRI, it leads to the mandatory death sentence.  It is seen as being in opposition to God, at war with God.  And, you know, that’s why atrocities on a massive scale have been perpetrated against the supporters of the NCRI.  In 1988, 30,000 supporters of the NCRI were massacred.  One of the biggest atrocities since the end of World War II.

BUCK SEXTON:   Clearly, the Iranian government has concerns about these opposition groups around the world.  That’s why they target them with violence and terrorism.  How hopeful are you that there will be a change going forward in Iran and that there will be a liberation from this mullahcracy, as some call it?

STEVENSON: There is no way that the current regime is sustainable.  They are still trying to spend billions backing all of these proxy wars around the Middle East, spending, you know, billions trying to demonize the opposition, the NCRI, and you know, sponsoring these terrorist attempts around the world.  This is not sustainable.  The people taking to the streets in all the towns and cities in Iran for the past 16 months, many of them are shouting, “What about us?  Forget Syria, forget Hezbollah.  What about us?  Pay our wages.  Help us to feed our families.”  I mean the economy is collapsing in Iran.  The mullahs are on their last legs, and the tipping point is about to be reached where they will be swept from power.

BUCK SEXTON:  Struan Stevenson, thank you so much for joining us.  We appreciate it.